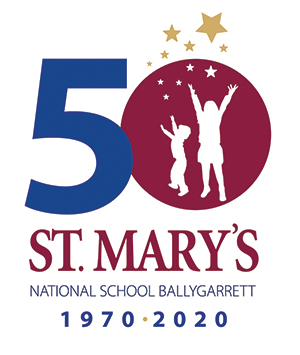 The following is an extract from the School’s official Anti-Bullying Policy – a full copy of the policy and the appendices are available from the school office.

1. In accordance with the requirements of the Education (Welfare) Act 2000 and the Code of Behaviour guidelines issued by the NEWB, the Board of Management of St. Mary’s N.S., Ballygarrett has adopted the following anti-bullying policy within the framework of the school’s overall Code of Behaviour. This policy fully complies with the requirements of the Anti-Bullying Procedures for Primary and Post-Primary Schools which were published in September 2013.

2. The Board of Management of St. Mary’s N.S. is committed to the highest possible standard of education for all its pupils. Bullying behavior, by its very nature, undermines and dilutes the quality of education and imposes psychological damage. As such, it is an issue which must be positively and firmly addressed through a range of school based measures and strategies through which all members of the school community are enabled to act effectively in dealing with this behaviour.

The Board of Management recognises the very serious nature of bullying and the negative impact that it can have on the lives of pupils and is therefore fully committed to the following key principles of best practice in preventing and tackling bullying behaviour.

In accordance with the Anti-Bullying Procedures for Primary and Post Primary Schools bullying is defined as follows:

Bullying is unwanted negative behaviour, verbal, psychological or physical conducted, by an individual or group against another person (or persons) and which is repeated over time.

The following types of bullying behaviour are included in the definition of bullying:

Isolated or once-off incidents of intentional negative behaviour, including a once-off offensive or hurtful text message or other private messaging, do not fall within the definition of bullying and will be dealt with, as appropriate, in accordance with the school’s code of behaviour.

Negative behaviour that does not meet this definition of bullying will be dealt with in accordance with the school’s Code of Behaviour.

Additional information on different types of bullying is set out in Section 2 of the Anti-Bullying Procedures for Primary and Post-Primary Schools.

This policy applies to activities and events that take place

St. Mary’s N.S. reserves the right to take action against bullying perpetrated outside school which spills over into the school.

4. Who Is Responsible For Doing What

The relevant teachers for investigating and dealing with bullying are as follows (in accordance with Section 6.8. of the Anti-Bullying Procedures For Primary and Post Primary Schools)

A pupil or parent may bring a bullying concern to any teacher in the school. Individual teachers must take appropriate measures regarding reports of bullying behaviour in accordance with our school’s anti-bullying policy.

5. The Education and Prevention Strategies

The Education and Prevention Strategies (including strategies specifically aimed at cyber-bullying and identity-based bullying including in particular, homophobic and transphobic bullying) that will be used by the school are as follows: (see Section 6.5 of the Anti-Bullying Procedures for Primary and Post Primary Schools):

The best way to address cyber-bullying is to prevent it happening in the first place. Prevention and any awareness raising measures will focus on educating pupils on appropriate online behaviour, how to stay safe while on-line and also on developing a culture of reporting any concerns about cyber-bullying.

Measures which may assist in highlighting awareness:

6. The School’s procedures for investigating, follow up, recording and intervention strategies.

The primary aim for the teacher in investigating and dealing with bullying is to resolve any issues and to restore, as far as is practicable, the relationships of the parties involved (rather than to apportion blame);

(ii) In investigating and dealing with bullying, the teacher will exercise his/her professional judgement to determine whether bullying has occurred and how best the situation might be resolved;

(iii) All reports, including anonymous reports of bullying will be investigated and dealt with by the teacher. In this way pupils will gain confidence in ‘telling’. This confidence factor is of vital importance. Pupils will be made aware that when they report incidents of bullying they are not considered to be telling tales but are behaving responsibly;

(iv) Non-teaching staff such as secretaries, special needs assistants (SNAs), caretakers, cleaners will be encouraged to report any incidents of bullying behaviour witnessed by them, or mentioned to them, to the relevant teacher;

(v) Parents and pupils are required to co-operate with any investigation and assist the school in resolving any issues and restoring, as far as is practicable, the relationships of the parties involved as quickly as possible;

(vi) It is very important that all involved (including each set of pupils and parents) will be informed and understand the above approach from the outset;

(vii) Teachers should take a calm, unemotional problem-solving approach when dealing with incidents of alleged bullying behaviour reported by pupils, staff or parents;

(viii) Incidents are generally best investigated outside the classroom situation to ensure the privacy of all involved;

(ix) All interviews should be conducted with sensitivity and with due regard to the rights of all pupils concerned. Pupils who are not directly involved can also provide very useful information in this way;

(x) When analysing incidents of bullying behaviour, the teacher should seek answers to questions of what, where, when, who and why. This should be done in a calm manner, setting an example in dealing effectively with a conflict in a non-aggressive manner;

(xi) If a group is involved, each member may be interviewed individually at first. Thereafter, all those involved should be met as a group. At the group meeting, each member should be asked for his/her account of what happened to ensure that everyone in the group is clear about each other’s statements;

(xii) Each member of a group should be supported through the possible pressures that they may face them from the other members of the group after interview by the teacher;

(xiii) It may also be appropriate or helpful to ask those involved to write down their account of the incident(s);

(xiv) In cases where it has been determined by the teacher that bullying behaviour has occurred, the parents of the parties involved should be contacted at an early stage to inform them of the matter and explain the actions being taken . See sanctions (refer to Code of Behaviour). The school will give parents an opportunity of discussing ways in which they can reinforce or support the actions being taken by the school and the supports for their pupils;

(xv) Where the teacher has determined that a pupil has been engaged in bullying behaviour, it will be made clear to him/her how he/she is in breach of the school’s anti-bullying policy and efforts will be made to try to get him/her to see the situation from the perspective of the pupil being bullied;

(xvi) It will also be made clear to all involved (each set of pupils and parents) that in any situation where disciplinary sanctions are required, this is a private matter between the pupil being disciplined, his or her parents and the school;

(xvii) Follow-up meetings with the relevant parties involved will be arranged separately with a view to possibly bringing them together at a later date if the pupil who has been bullied is ready and agreeable. This can have a therapeutic effect;

All recording of bullying incidents will be done in an objective and factual manner.

The Board of Management will ensure that the school has clear procedures for the formal noting and reporting of bullying behaviour and are documented in the school’s anti-bullying policy. All records will be maintained in accordance with relevant data protection legislation. The school’s procedures for noting and reporting bullying behaviour will adhere to the following:

The school’s procedures for noting and reporting bullying behaviour are as follows:

Informal pre-determination that bullying has occurred

The recording template must be retained by the relevant teacher in question and a copy maintained by the principal for the duration of a child’s enrolment within the school and for a further 3 years.

It should also be noted that the timeline for recording bullying behaviour in the recording template at Appendix 5 does not in any way preclude the teacher from consulting the Principal or Deputy Principal at an earlier stage in relation to a case.

Bullying as part of a continuum of behaviour:

It is important to note that bullying behaviour can be part of a continuum of behaviour rather than a stand-alone issue and in some cases behaviour may escalate beyond that which can be described as bullying to serious physical or sexual assault or harassment. The school will refer to relevant external agencies and authorities where appropriate. In cases where a school has serious concerns in relation to managing the behaviour of a pupil, the advice of the National Education Psychological Service (NEPS) should be sought.

In relation to bullying in schools, Children First National Guidance for the Protection and Welfare of Children 2011 (Children First) and the Child Protection Procedures for Primary Schools provide that in situations where “the incident is serious and where the behaviour is regarded as potentially abusive, the school must consult the HSE Children and Family Social Services with a view to drawing up an appropriate response, such as a management plan”.

Serious instances of bullying behaviour should, in accordance with the Children First and the Child Protection Procedures for Primary Schools, be referred to the HSE Children and Family Services and/or Gardaí as appropriate.

The Child Protection Procedures for Primary and Post-Primary Schools also provide that where school personnel have concerns about a child but are not sure whether to report the matter to the HSE, the Designated Liaison Person must seek advice from the HSE Children and Family Social Services.

Supports for pupils affected by bullying

7. The class teacher and a learning support/resource teacher will provide a programme of support for pupils who have been bullied. Such pupils may need counselling and/or opportunities to participate in activities designed to raise their self-esteem, to develop their friendship and social skills and thereby build resilience whenever this is needed.

This programme of support is also part of the school’s intervention process. Pupils involved in bullying behaviour need assistance on an ongoing basis. For those with low self-esteem, opportunities will be developed to increase feelings of self-worth. The learning strategies applied within the school allow for the enhancement of the pupil’s self-worth. Pupils who engage in bullying behaviour may need counselling to help them learn other ways of meeting their needs without violating the rights of others.

Pupils who observe incidents of bullying behaviour should be encouraged to discuss them with teachers.

8. Supervision and Monitoring of Pupils

The Board of Management confirms that appropriate supervision and monitoring policies and practices are in place to both prevent and deal with bullying behaviour and to facilitate early intervention where possible.

The Board of Management confirms that the school will, in accordance with its obligations under equality legislation, take all such steps that are reasonably practicable to prevent the sexual harassment of pupils or staff or the harassment of pupils or staff on any of the nine grounds specified i.e. gender including transgender, civil status, family status, sexual orientation, religion, age, disability, race and membership of the Traveller community.

12. This policy and its implementation will be reviewed by the Board of Management once in every school year. Written notification that the review has been completed will be made available to school personnel, published on the school website (or where none exists, be otherwise readily accessible to parents and pupils on request) and provided to the Parents’ Association (where one exists). A record of the review and its outcome will be made available, if requested, to the patron and the Department.